One Missing Jet, One Sunken Ferry, One Idiot 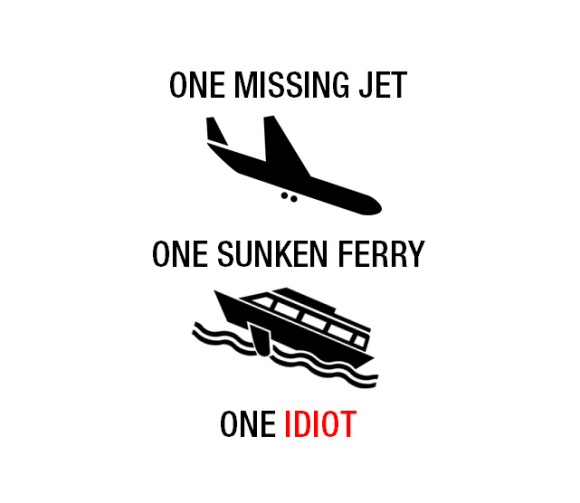 Malaysia Airline is merely a third world country’s airline. Therefore it do not understand the concept of transparency, responsibility and even how to coordinate search and rescue operation.

So when MH370 disappeared, the Government of Malaysia chose to hide the real cause of the great tragedy, lied to the whole world and mislead the international media. Of course it was deliberately done in cohort with 26 other countries. Strangely for this incompetent country, it managed to put together one of the biggest international search efforts the world has ever seen. Some of them often, don’t even get along. This must have been some accidental and through a fluke by Malaysia.

That the MH370 tragedy is unprecedented in modern civil aviation history was overlooked or ignored. Could it be because the country is governed by a brown-skinned Malay Government which just cannot be smart and destined to fail? Or could it be that this is the country when dealing with Asian Financial Crisis in 1998 has thumbed its nose at the global superpower by refusing financial assistance? God knows.

The raw hatred for Malaysia’s handling in MH370 by some members of  international media is mind boggling. Nothing is right about MH370. The impunity with which international media is casting aspersions on the pilots is disturbing. Is there any highly publicised investigations into the pilots’ personal lives during Air France AF447 crashed?  The double standard must be due to MAS’ pilots are the potential terrorist thus it is acceptable for Capt Zaharie Ahmad Shah’s private life to be torn apart.

The maker of the plane, Boeing is not at fault. MAS is. Boeing’s aircraft was and will continue to be safe to use. That is why they had said practically nothing to explain why the aircraft can disappear in mid-air so completely.

Apparently after 60 days, Malaysia can only write a mere 5 pages report.  It is very lazy and unimaginative of the Government. A smart Government would fabricate information such as claims of sighted debris or the countless theories of the plane to ensure the MH370 tragedy rendered a thick report.

Given such circumstances, the Prime Minister of Malaysia should resign so that the darling of the western media, Mr Opposition Leader can take over the country and solve the MH370 mystery in a split second. In fact the president of United States did the same thing when he struggled to handle  the aftermath of Hurricane Katrina in 2005. Did he?

Whatever, Malaysia must take heed of the advice by the impartial international media, a true preacher of press freedom which truly exercised its freedom by tapping the telephones of the leaders to run its story and accepted bribes to soften reports about all kinds of shenanigans by powerful people.

Thank you Mr William Pesek-an award-winning Bloomberg journalist for giving top marks to South Korea for its handling of its ferry tragedy. We now know in order to get an A minus,we must modified the vehicle and overload it with passengers. When disaster happens, we send rescue boats only to pick up the crews and left students to die.  Special thanks to CNN too.

I wrote this article not because I expect any Western journalist to apologise. They will not change. I write simply to draw attention to the fact that they are not the impartial purveyor of truth that people assume them to be.